The World describes the metaphysical journey of Arkin from initiation to Magus through the structure of the four suits and the twenty-two major arcana of the Tarot deck. 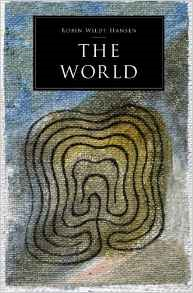 The World describes the metaphysical journey of Arkin from initiation to Magus through the structure of the four suits and the twenty-two major arcana of the Tarot deck. Arkin, the protagonist, may be schizophrenic; the voices he hears and the obsessions he has may be related to his emerging schizophrenia, or, they may be the manifestations of power that he is too frightened to embrace.

The World can be read allegorically, or it can be read as straight-forward fantasy, although my preference is for the former interpretation. Drawing on Norse, Christian, classical and Yoruba mythologies (those were the ones I recognized, at least), Arkin’s journey through the labyrinth of his neurology, or through the labyrinth of initiation and testing, to his ultimate goal, is written in a mix of prose poetry, stream of consciousness, and straight-forward prose, not always the easiest read but one worth pursuing.

Just before I read The World I had – coincidentally – been reading about the religious experiences of subjects using mescaline or peyote in Aldous Huxley’s Doors of Perception. There are strong similarities to parts of Arkin’s journey, although I do not think the book is an indictment or an endorsement of the use of mind-altering drugs. Instead, I read The World as an alternative interpretation of differences in perception that the Western world sees as mental illness. I kept thinking of the classic (but very different) work of the 1960’s, Joanne Greenberg’s I Never Promised You a Rose Garden, which also delved into the mind of a young schizophrenic patient, and how she also communicated with gods and angels.

The World will not be a book for everyone. It isn’t, as I said, an easy read, and a knowledge of at least the basic symbolism of western – and other – religions is likely necessary to appreciate Arkin’s journey. I suspect I missed a fair bit, but understood enough to appreciate the roles that most of the beings that appear to Arkin played. The use of the Tarot deck to frame and structure the story is interesting. Many years ago I read – somewhere – that the purpose of a Tarot deck was to help the person for whom the reading was being done to break out of their automatic ways of thinking and search for new interpretations of what was happening in their life – in very simplistic terms, to help them see that what they thought of as a barrier might actually be a door. That interpretation of Tarot and Arkin’s initiatory journey through the card’s symbols resonated for me.

I’m giving The World four stars: there were a few production errors, some awkward sentences, a few run-on paragraphs that I felt detracted somewhat from the narrative. They were not serious, though, and did not prevent me from reading The World in one day, which is a testament to its strength.

One thought on “The World, by Robin Wildt Hansen: A Review”