Do the books tell an intricate, coded story that is not what it appears, but rather a narrative as complex as the symbolism in a medieval painting? 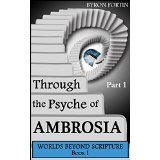 “A riddle wrapped in a mystery inside an enigma.” Churchill’s famous description of Russia during World War II also applies to Byron Fortin’s duo of books A Nexus of Numen and A Swain’s Affray under the umbrella title Through the Psyche of Ambrosia. I’m going to be honest and say for a long time I didn’t know what to make of the books; as I worked my way through them – and it was work – at first what I saw was a story of a young man, Ambrosia, raised in a remote location by four women he calls the Mothers, who is suddenly catapulted into a modern world.

Over-detailed and overlong description, of places, of people, of what Ambrosia is thinking, make up a large part of the books, as suggested by the umbrella title. But about two-thirds of the way through the first book, the narrative suddenly changes from Ambrosia’s inner thoughts and reactions to a section that is mostly dialogue. This part read very differently, and it was at this point I began to wonder if there was more to the books than I thought. At about the same time, I began to notice that some of the descriptive sentences actually made very little sense – some read as if they had been translated from another language, some as if they were simply a string of words that almost made sense, but on closer examination didn’t: “Those indigo locks, they trailed the touch of porcelain silk shoulders as the skin she was in absorbed the surrounding world as freckles on the face of her ever abounding glory.” (from Book II, A Swain’s Affray). I began to notice character’s names were frequently those of constellations or stars. I analyzed the words Ambrosia hears calling to him – Natarehs La Mihtrasem – which are – planned by the author or not – anagrams of the names of two Middle Eastern settlements. Hmmm….

There are other examples I won’t give, as too many become spoilers. The question remains: do the books tell an intricate, coded story that is not what it appears, but rather a narrative as complex as the symbolism in a medieval painting, or are all the ‘hints’ of that simply coincidence? I remain on the fence, and in the end not interested enough in wading through the prose to pursue the former interpretation. But it remains a possibility, one that may spark curiosity in other readers with more interest in the arcane, and could certainly form the basis for an interesting book club discussion. Two stars.

The author provided me with copies of the books in exchange for an honest review.

One thought on “Through the Psyche of Ambrosia, Books I & II, by Byron Fortin: a Review”