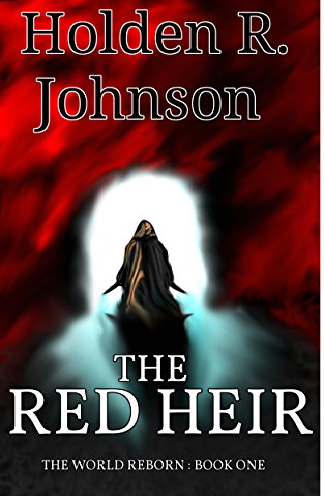 Elemor once had magic, but it has gone. Or has it? For there are doors that will open only

for Vall, doors that used to open into another room, or out to the street, but now, when Vall passes through them, they take him to another place, where the Essence flows freely. Vall doesn’t just open doors: he is the Terror of Helforn, an assassin, driven to serve the dark forces from that other place in order to free his father.

The Red Heir, the debut novel by indie writer Holden Johnson, is a cut above most high fantasy books I’ve read in the past couple of years. Johnson’s world is carefully and consistently constructed, and the detailed back-story fleshing out the characters of Vall (and others) gives a solid foundation to the events and action of the book. Both character development and plotting are strengths; the story may be a bit slow for some readers but it is the first of a series, and personally I like a well-developed, fully-explained world.

I could detect influences from the world of gaming and from Tolkien, but influences were all they were, not copy-cat situations, and all writers are influenced by other sources. While some sentences were awkwardly worded, for the most part the writing was fluent, not overblown as some high fantasy writing tends to be, nor too ‘modern’. A bit of tightening and polishing wouldn’t hurt the book, but on the other hand it held my attention and interest as it stood.

Overall, I’m giving The Red Heir four stars out of a possible five, for its unique, well-developed world and attractive characters, as well as a compelling plot. I look forward to the next instalment in the series.