If you’re a fan of Disney’s princess films, you’ll like this book. 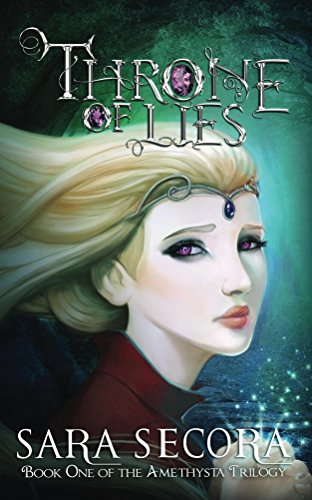 On long-haul flights, I occasionally watch animated films, usually from Disney/Pixar, enjoying their satisfying simplicity; they’re a pleasurable, escapist way to pass a couple of hours. Throne of Lies, from new author Sara Secora, falls squarely into this category. If you’re a fan of Disney’s princess films, you’ll like this book.

Princess Amethysta Serelle of Northwind is the heir to the throne….but she doesn’t want to be. Betrothed to a man she dislikes, bored and irritated by the restrictions on her life, and puzzled by the odd and frightening things that happen when strong emotion grips her, she attempts to escape the expectations of her parents. Her journey of self-discovery is both aided and frustrated by her newest personal guard, the disturbingly handsome commoner, Soren.

Throne of Lies is a charming fairy-tale incorporating many of the aspects of classic, Disneyfied fairy-tale, but with a modern twist. Fingers are pricked on thorns, apples are eaten, shoes are tried on…but these are all peripheral to the story, background reminders of the genre. Nor is it the cautionary fairy-tale of the Brothers Grimm: there is nothing terribly dark here, although one scene does not flinch from the realities of what can happen to a young girl alone. But not all apparent monsters are what they seem, either.

The ARC I read had the usual number of production errors, which is to be expected from a pre-publication version. There were also a few grammatical errors, odd changes of tense within sentences, and non-traditional uses of words that affected flow and comprehension. The story, I felt, was a bit slow to get going; there are some early scenes that are too detailed or drawn out without substantially adding to either the world-building or the plot; this might discourage some readers.

I would have recommended this book for readers eleven and up, but two scenes in the book suggest that thirteen and up is a better age recommendation. My personal rating is 3 1/2 stars; this will be 4 stars on Goodreads and Amazon.