This is the first in an occasional series about the historic and geographic background to my historic fantasy series, Empire’s Legacy.

Lena’s world, in the Empire’s Legacy trilogy, is imaginary, but at the same time it isn’t: it is firmly rooted in the landscape and history of Britain and Northern Europe.  I started writing Empire’s Daughter with nothing more than an image in my mind, an image of a young fisherwoman, a fishing village, and the harbour and hills.  But the picture in my mind wasn’t imaginary: it was Anglesey, Ynys Môn, an island off the coast of Wales. 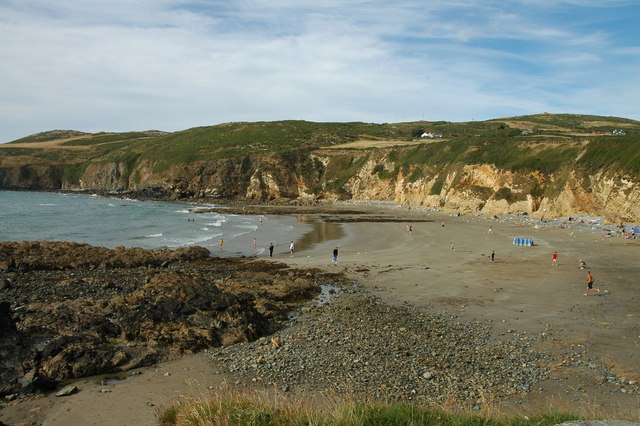 So, when I picture Tirvan, this is, more or less, what it looks like in my mind.(Remove the modern aspects!)  The fishing harbour would be where the beach is; the village houses close to the harbour (perhaps the cliffs aren’t quite so steep, at least in one area), and the meeting hall, the baths, the forge and the sheep-fields further up the hillsides.

This landscape isn’t unique to Wales; you’ll find similar coastal coves along much of the West Country of England, on both coasts, and throughout Scotland.  And I’ve only been to Anglesey once, but still, it was that landscape that began the book.

And likely influenced its development.  Anglesey was a holy island to the pre-Roman people of Britain, and associated with the resistance of these people to Roman rule, that resistance centred in their priests, the Druids.  In AD 60, the Roman general Paulinus attacked Anglesey, destroying sacred groves and shrines, and in folk memory driving the Druids into the sea. It took a few years (and a few more battles for supremacy within Britain) but by AD 78 Anglesey was firmly under Roman control, the Romans building forts, mines and roads on the island. (At least one road is still in use).

I knew all this, from various courses I’d taken and books I’d read. So, when Anglesey arose in my consciousness as the referent for Tirvan, it brought with it all these Roman associations…which in turn led to me modelling the Empire’s military on that of Rome, and indeed the basic infrastructure of the Empire on that of Britannia (Britain) during its time of Roman rule.

In further installments, I’ll talk about how other aspects of Roman military and non-military life influenced Empire’s Daughter, and where and why it deviates completely from any known history. (That is why I call it historic fantasy; there’s no magic, which the word ‘fantasy’ usually connotes, but it certainly isn’t history! Maybe I should call it ‘imaginary history’!)