I am of two minds about this book (a debut science fiction novel by author H. William 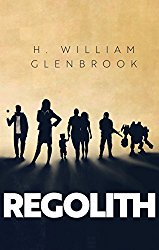 Glenbrook), because I liked half of it but not the other half. Two interconnecting stories make up Regolith: one is a fairly standard ‘spaceship crew fighting aliens’ story; one is a tale of corporate research, in-fighting, and one-upmanship that provides the climax and ultimately the back-story to the other half.

The half I liked is the ‘battle against the aliens’ story. It’s a pretty standard shoot-em-up for the most part; while set in space, it could have been set in any troubled area of the world, with a few changes in technology.  Written in spare, staccato prose, it still manages to convey emotion as well as action.

The corporate half, while ultimately necessary for the denouement, I didn’t like. Subject to too many clichés and wooden characters, as well as awkward dialogue, it might have been better addressed as a prologue to the main story, dealt with in a few pages of exposition until necessarily being reintroduced near the end of the main narrative.

While overall the story could be read as a metaphor for every misguided intervention in world politics made by various governments and countries over the centuries, three stars is the best I can do, and perhaps generously, for this debut novel.