I found Reaper more satisfying than some of the longer books. It’s tighter, more focused on the immediate issues. 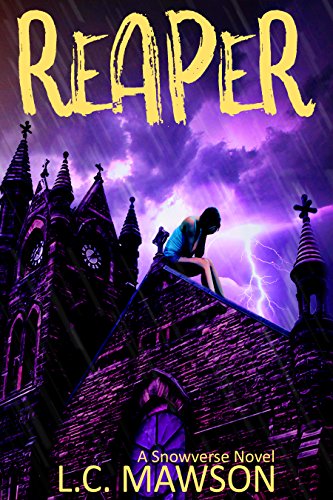 Reaper is the seventh book in the Snowverse series, continuing Freya’s adventures

almost immediately after Enhanced.  With Alex, Freya is travelling in Europe, dealing with car-sickness and more: the diversity of supernatural genes she carries result in upheavals she cannot fully control, and her past experiences are adding to the volatility.

Freya’s difficulties in controlling her emerging powers, and in tapping into the ones she needs to access, reminded me (not in a plagaristic manner, but in a thematic way) of the “Threshold Sickness” of the psi-enhanced characters in Marion Zimmer Bradley ground-breaking Darkover series.  The disruption that uncontrolled psi powers can wreak, when an untrained individual accesses them, can have far-reaching and dramatic effects: a great subject matter for a book,  and I was pleased to see the issue addressed in Reaper. (By the way, if you’re a fan of the Snowverse, then I’m guessing you’re a fan of diversity in science fiction and fantasy – and if you haven’t read the Darkover series, give it a try. Yes, it was written in the 1960’s, but for early introduction and acceptance of LGBTQ characters, it was truly a ground-breaker.)

Lucy Mawson’s skills as a writer have blossomed over this series, and her depiction of Freya’s internal conflict about Alex, and her realization of how to access her Angel powers, are some of the author’s best writing. Freya is learning, too, to make the distinction between how her autism directly affects her relationships, separate from how her (unrecognized?) emotional reactions to past events affects both herself and how she relates to others.  I’m treading carefully here, because I’m allistic, or as my husband prefers, a neurotyp, but certainly Alex’s attempts to help Freya handle her reactions and understand them rang very true to me, after thirty-eight years of living with a man with ASD.

Reaper is short – 139 pages in my e-book edition – but it doesn’t suffer from that; in fact, I found it more satisfying than some of the longer books. It’s tighter, more focused on the immediate issues. Five stars.