Their Greatest Game continues the story of Theren, the world’s first synthetic intelligence, that began in First of Their Kind. 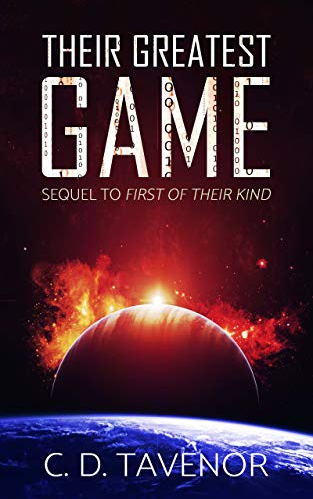 Their Greatest Game continues the story of Theren, the world’s first synthetic intelligence, that began in First of Their Kind.
Less overtly philosophical than First of Their Kind, Their Greatest Game continues to ask important questions about what makes us human – and what makes a god. The strong religious (not necessarily Christian, as stories of sacrifice, rebirth, and godhood belong to many people) overtones do not in the slightest detract from the classic science fiction elements.
This book in the series takes place over a much longer time frame, necessitating some techniques for covering the lacunae in the action that Tavenor handles for the most part well, although one or two I found a little overlong. Theren grows in power; their ability to spread their divided consciousness across worlds speaks to their evolution toward a deity-like being, a concept further strengthened by decisions Theren makes about their corporeal body late in the book. But they are not omnipotent, nor omniscient, and there are consequences to their choices.
I remain very impressed by Tavenor’s writing, both in clarity and concept: it makes me think, the science is sound (or at least as far as I, a biologist/geneticist by education, can tell), and the character of Theren compelling. What disappointed me to some extent was the epilogue, where Tavenor introduces a new concept, or at least one that is mentioned occasionally but not fully explored until then. It had a slight ‘added-on’ feel, suggesting that it may be important in the next book, and is being introduced here for that purpose. A minor issue in what has definitely been some of the best pure science fiction I have read in a long while.