It’s been a while since a book has given me as much delight as did Rob Steiner’s Citizen Magus. 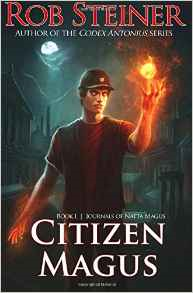 Written with a deft, sure, and light hand, this is the story of Remington Blakes, a.k.a. Natta Magus, a twenty-first century magus who has been transported against his will back to the Rome of 6 B.C. by his magical mentor. Steiner blends action, ethical dilemma, romance, humour and an accurate geographical and physical portrayal of ancient Rome to create a magical romp, that, while mostly light-hearted, also addresses some serious ethical questions.

The self-effacing hero of Citizen Magus has managed to set himself up as an artisan magus, providing finding services (his specialty) for the citizens of Rome. But he has not given up on searching for his mentor, William Pingree Ford, both to stop him meddling with history and to perhaps get home. When an evil, vampire-like creature murders a young woman and kidnaps another, Remington is swept up into a battle to defeat the creatures, which are part of Ford’s plot.

I particularly liked two things about Citizen Magus: the magic, and the setting. Remington’s magic is neither particularly arcane, nor is it matter-of-fact. Almost all people of this alternative Earth of the 21st century have magic. It’s a subject to be studied in university, which Remington has been doing back home in Detroit. There’s a believable explanation of how it works and what energies it uses, and of the laws and vows that govern it. The fact that Remington’s magical regalia includes a Detroit Wolverines baseball cap worn backwards reflects the overall light-hearted tone of the book.

As a writer whose own work is set in an analogue of the post-Roman world of northern Europe, I’ve spent a lot of time reading about, and taking courses on, the Roman Empire. Steiner’s portrayal of the geography, politics, and ways of life (and smells) of ancient Rome and its people added to my appreciation of the book: magic is more convincing when it’s inserted into a world that is otherwise realistic. But having set the book in a well-described Roman Empire, Steiner does not attempt to make the spoken language a direct translation of Latin, or archaic English. People speak fairly standard English, with a few Latin words that are easy to understand thrown in, effectively reminding the reader of the setting without adding difficulties to the dialogue that might detract from the flow of the narrative.

At this point in a review, I usually discuss my ‘niggles’: things that weren’t quite right. With the exception of one error missed in the copy-editing (an ‘it’s’ used when ‘its’ should have been) I found no errors of grammar, spelling or production in the e-pub version I read, for which the author and his editor should be commended.

I’m giving a solid 5 stars to Citizen Magus. I’m looking forward to the further adventures of Remington Blakes, as well as to reading Steiner’s earlier Codex Antonius series: if they are as good as this book, they’ll be well worth reading.

The author kindly provided me with a copy of this book in exchange for an honest review.

One thought on “Citizen Magus, by Rob Steiner: A Review”