Tantalizing glimpses into a world where magic is part of everyday life, practiced by those trained in it and both revered and rejected by those who are not initiates 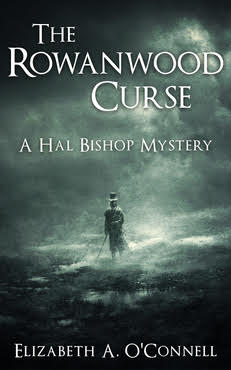 In a world where magic helped the industrial revolution begin, the sons of one of the greatest industrial magicians England has known are called upon to lift a curse laid on the daughter of mine owner Jasper Pryce. Bored with the routine probate magic they are practicing, they accept the offer, and travel north to find the girl near death, the local farmers besieged by a beast, and the mine itself beset by problems.

Reminiscent of Susanna Clarke’s Jonathan Strange and Mr Norrell, but less dense and less complex, The Rowanwood Curse nevertheless is an enjoyable read. Author Elizabeth O’Connell writes in a consistent period voice with almost no mis-steps, giving us tantalizing glimpses into a world where magic is part of everyday life, practiced by those trained in it and both revered and rejected by those who are not initiates. Because magic, as it exists in O’Connell’s world, behaves consistently with traditional faerie and elemental magic known to us from children’s books onward, there is little cognitive dissonance for the experienced fantasy reader: the tale is one of familiar elements, not surprises. Nonetheless, the story is well-crafted. The Rowanwood Curse is one of a proposed series, and therefore its lack of detail in world-building is more teasing than annoying: I want to know more about aether-engines, and probate magic, and all sorts of things hinted at but not fully explained, and that desire to know more will bring me back to the series, as the author intends.

The Rowanwood Curse is short, more novella length than full novel, and fairly predictable. The characters – magicians Hal and Jem Bishop, industrialist Sir Jasper Pryce – will feel familiar to readers of Victorian-era stories and/or those of us addicted to BBC period dramas. In short, I’d describe the book as a comfortable excursion into an almost-known magical world, a good book to curl up with on a rainy afternoon (or as I did, read on a flight, where escapism without significant challenge is an antidote to the discomfort of flying); bake some gingerbread, brew some tea, light the fire, (diet coke and pretzels really didn’t quite suit it) and enjoy the story. Four stars.