Falling squarely into the fantasy genre, Child of the Light is set in a well-realized world. 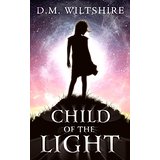 Child of the Light is the first book by indie author D.M. Wiltshire. Falling squarely into the fantasy genre, Child of the Light is set in a well-realized world, Gaitan, where north and south have been at war for generations. Cael, the prince of the north, is suffering from an agonizing illness that is beyond the knowledge of the Master Healer, Caldor. The answer may lie in the medical knowledge of the province of Morza, but in one searing moment on the night of the 200 Year Moon, Morza – and all her people – are destroyed by a flash of light: a judgment from the gods, or a celebration gone horribly wrong?

When Caldor and his friend Foe go to investigate, they find two things: the healer Naygu’s book, hidden, safe, and written in a language Caldor can’t read, and the footsteps of a child, leaving the devastated city. Could this only survivor hold the key to the book and the healing of Cael?

Child of the Light is competently plotted and written. The author has woven together familiar constructs from fantasy, but in a way that presents them, not as stereotypes, but as valid and necessary aspects of Gaitan. None of the fantasy aspects felt imposed: there are dragons, not because a fantasy series needs dragons, but because they are simply part of Morza’s culture. The pace is slower than many current fantasy books, but as a reviewer I prefer this to rushed and incompletely realized stories where action takes precedence over character development and world-building. I was still left with many questions about Gaitan and its history and culture, but not in a frustrating way: I am confident these questions will be answered in future volumes. The main characters, Caldor and Foe, and the child Liora, are well-rounded, characters who develop over the story.

This is the first of a planned series, and so while most conflicts and challenges specific to the central characters are brought to a conclusion, other threads of the story are not, and the book ends with a tantalizing hint of future developments.

Niggles? Not many. There are the occasional awkward (to me) sentence or paragraph transition, and a couple of times I thought chapter structures, in terms of how the action developed in that chapter, had some misplaced scenes. A production error in the paperback version I read had one chapter single-spaced where the rest are more widely spaced. Fairly minor issues that didn’t detract from the overall story.

I’m giving Child of the Light four stars. I’d recommend it to anyone who likes true fantasy, or is looking for a change from dystopian futures. The sequel, Children of Sirphan, is in process, and I look forward to following the series.

The author provided me with a copy of this book as part of a contest prize.  This is an honest and unbiased review.

One thought on “Child of the Light, by D.M. Wiltshire: A Review”