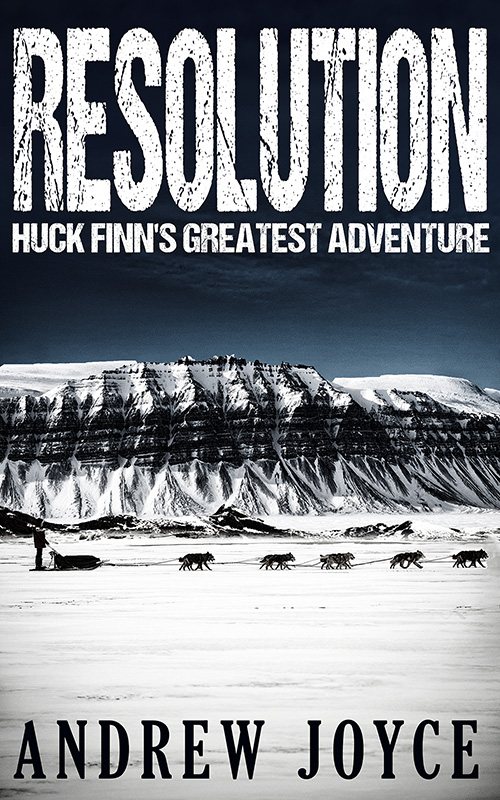 I’m pleased to give space today to fellow author Andrew Joyce, author of some intriguing books continuing the lives and adventures of two of American literature’s favourite characters: Huck Finn and Tom Sawyer.  Here’s an introduction to the series from Andrew.

My name is Andrew Joyce, and I write books for a living. Marian has been kind enough to allow me a little space on her blog to promote my new book, RESOLUTION: Huck Finn’s Greatest Adventure, so I thought I’d tell you how it came about. It all started way back in 2011 . . .

My first book was a 164,000-word historical novel. And in the publishing world, anything over 80,000 words for a first-time author is heresy. Or so I was told time and time again when I approached an agent for representation. After two years of research and writing, and a year of trying to secure the services of an agent, I got angry. To be told that my efforts were meaningless was somewhat demoralizing to say the least. I mean, those rejections were coming from people who had never even read my book.

I had just finished reading Mark Twain’s Huckleberry Finn for the third time, and I started thinking about what ever happened to those boys, Tom and Huck. They must have grown up, but then what? So I sat down at my computer and banged out REDEMPTION: The Further Adventures of Huck Finn and Tom Sawyer in two months; then sent out query letters to agents.

Less than a month later, the chairman of one of the biggest agencies in New York City emailed me that he loved the story. We signed a contract and it was off to the races, or so I thought. But then the real fun began: the serious editing. Seven months later, I gave birth to Huck and Tom as adults in the Old West. And just for the record, the final word count is 79,914. The book went on to reach #1 status in its category on Amazon—twice. It even won the Editor’s Choice Award for best Western of 2013. The rest, as they say, is history.

My agent then wanted me to write a sequel, but I had other plans. I was in the middle of editing down my first novel (that had been rejected by 1,876,324 agents . . . or so it seemed) from 164,000 words to the present 142,000. However, he was insistent about a sequel, so I started to think about it. Now, one thing you have to understand is that I tied up all the loose ends at the end of REDEMPTION, so there was no way that I could write a sequel. And that is when Molly asked me to tell her story. Molly was a minor character that we met briefly in the first chapter of REDEMPTION, and then she is not heard from again.

So I started to think about what ever happened to her. After a bit of time—and 100,000 words—we find out what did happen to Molly. It is an adventure tale where Huck Finn weaves through the periphery of a story driven by a feisty female lead. Molly Lee was my second book, which achieved #2 status on Amazon.

Now I was finished with Huck Finn and Tom Sawyer for good. Now I could go back to my first novel and resume the editing process.

It was then that Huck and Molly ganged up on me and demanded that I resolve their lives once and for all. It seems that I had left them hanging, so to speak. Hence, RESOLUTION: Huck Finn’s Greatest Adventure. Here is the blurb from the back cover of the book:

It is 1896 in the Yukon Territory, Canada. The largest gold strike in the annals of human history has just been made; however, word of the discovery will not reach the outside world for another year.

By happenstance, a fifty-nine-year-old Huck Finn and his lady friend, Molly Lee, are on hand, but they are not interested in gold. They have come to that neck of the woods seeking adventure.

Someone should have warned them, “Be careful what you wish for.”

When disaster strikes, they volunteer to save the day by making an arduous six hundred mile journey by dog sled in the depths of a Yukon winter. They race against time, nature, and man. With the temperature hovering around seventy degrees below zero, they must fight every day if they are to live to see the next.

On the frozen trail, they are put upon by murderers, hungry wolves, and hostile Indians, but those adversaries have nothing over the weather. At seventy below, your spit freezes a foot from your face. Your cheeks burn—your skin turns purple and black as it dies from the cold. You are in constant danger of losing fingers and toes to frostbite.

It is into this world that Huck and Molly race.

They cannot stop. They cannot turn back. They can only go on. Lives hang in the balance—including theirs.

The three books are stand-alones and are not part of a series. They can be read in any order. RESOLUTION is available as an eBook and in print. Both versions are available on Amazon.

There you have it. Now, if you nice people will just go out and buy RESOLUTION, perhaps Huck and Molly will leave me alone long enough so that I can get some editing done on my first novel.

Thank you for having me over, Marian. It’s been a real pleasure.

Andrew Joyce left high school at seventeen to hitchhike throughout the US, Canada, and Mexico. He wouldn’t return from his journey until decades later when he decided to become a writer. Joyce has written four books, including a two-volume collection of one hundred and forty short stories comprised of his hitching adventures called BEDTIME STORIES FOR GROWN-UPS (as yet unpublished), and his latest novel, RESOLUTION. He now lives aboard a boat in Fort Lauderdale, Florida, with his dog, Danny, where he is busy working on his next book, YELLOW HAIR.

3 thoughts on “Did you ever wonder what became of Huck and Tom?”