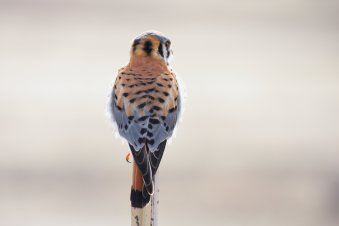 ometimes two parts of a life can collide unexpectedly. At my Monday morning writer’s group, which meets in the upstairs restaurant/bar of an independent bookstore, we had propped the patio doors open to let in the summer breezes. We’d all been working about an hour – this is a place for silent writing, not discussion or sharing – when I heard a high-pitched, rapid cry from the bar area. My writer’s brain disengaged, my birder’s brain engaged – that was the cry of a bird in fear of its life.

I and another writer ran for the bar area. Fluttering against the glass windows was a young kestrel. Pursuing a house sparrow, it had flown in the open door of the patio. The house sparrow was somewhere in the room, but our priority was the kestrel.

A sweater was found and thrown over the terrified bird. The other writer – herself experienced in bird banding – carefully carried it out onto the patio and let it go. I searched the room for the sparrow, but it was hiding somewhere.

About half an hour later someone came in from the bar area to say the sparrow was fluttering against the front windows. It was a simple matter to drop my cotton shirt over it, and carry it carefully to the patio. It vocalized the same rapid, high-pitched distress call the whole time I held it, but flew away as soon as I freed it from the confining cloth.

The chances of this happening are minuscule. Kestrels eat primarily insects, although small birds are also part of their diet; my guess is this was an inexperienced and hungry young bird that thought a house sparrow was fair game.

And when both birds were free again, my writer’s brain re-engaged and I went on to write 600 words of Empire’s Hostage.