Witch is the fifth book in the Freya Snow series, following the experiences of autistic, bi- 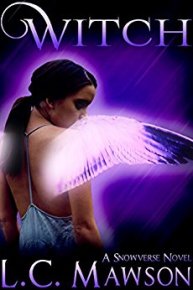 sexual, non-human Freya as she learns to navigate both the human world and the world of magic, discovering the complexities of both.

In the human world, Freya has a job as a barista; in the non-human world, she is mostly concerned with finding a way to lift a curse that has placed a friend into a coma-like state. As she solves this problem – with noticeably more skill in negotiation and communication than in earlier books – she also learns more about herself, her non-human family and her place in the hierarchy of magic. Freya’s friends play a larger part in this book; her human family is barely seen, and this is appropriate given Freya is older and more independent.

Freya’s developing maturity is paralleled by author L.C. Mawson’s development as a writer. Witch is perhaps a more thoughtful book than earlier installments, with less physical action and more development of, and insight into, Freya’s character and personality. The ending of Witch is indicative of Freya’s ability to accept responsibility, moving her from adolescent to adult.

Four stars to a pivotal installment in the series. For an overview of all the Freya Snow books, I suggest the author’s site here.

One thought on “Witch (Freya Snow Book 5) by L.C. Mawson: A Review”