The idea of the guardian angel who is supposed to watch and not interfere, and who loses its divine status if it becomes 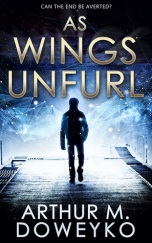 emotionally entangled with the person or persons it watches is not new. (For a thoughtful and beautiful take on this, watch the Wim Wenders film Wings of Desire. Watch the original, please, and not the Nicholas Cage remake City of Angels…they are very different films.) But, of course, no-one owns this concept, and in As Wings Unfurl, author Arthur M. Doweyko brings his own twist to the tale. Here, the ‘angel’ is an alien being, and humans are not what we think we are. Nor are we the oldest sentient hominid on Earth.

The protagonist, Applegate Bogdanski, is a Vietnam war vet with scars both physical and emotional. Through his work in a used book store, he becomes caught up in a scandal involving the Catholic Church…but the scandal, which on the surface appears to be a classic sexual misdemeanour, is so much more than that. The plot moves quickly, events piling on events. The writing is competent and consistent, the action scenes well-crafted, and the story structure keeps the reader interested.

But beyond all that, there are multiple parallels to the stories of the Old Testament (and likely stories from the other religious texts of the People of the Book – those of Jewish and Muslim holy books, but my knowledge of those is limited.) Even our protagonist’s name: Bogdan means, more or less, ‘beloved of God’; ‘Applegate’ could suggest the story of the Garden of Eden. Without giving any of the story away, there are parallels to the story of Lucifer; parallels to the story of creation; Apple’s physical injury mirrors that of Jacob after his wrestling match with an angel. Is any of this intended? That’s a question for the author, but for this reader it appeared so.

All of this – both the quality of the plot and the perceived allegory – intrigued me enough to keep me reading when I should have been doing other things; I finished the book in just a couple of days. Four stars for a book that can be read on more than one level.