Drawing on ‘documented’ UFO sightings, Hopi cosmology, and some non-mainstream 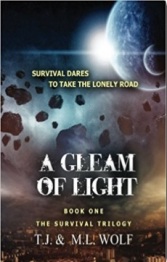 interpretations of various petroglyphs, religious practices, and experiences from around the world, A Gleam of Light pits a young Hopi woman and a reporter against the U.S. Army in a race for the secrets buried deep within a cavern on Hopi land.

The concept of using the cosmology of a people whose beliefs can be interpreted to mesh with UFO and alien sightings isn’t new – I’m old enough to remember – and to have read –  Chariots of the Gods, by Erik Von Daniken (although that was marketed as non-fiction.)  It’s a decent premise for a book, and in many ways A Gleam of Light reminded me of Dan Brown’s books, building a story around a race to interpret symbolic messages left by a previous generation.  Throw in some action and settings reminiscent of Indiana Jones and The Temple of Doom, and you’ve got the general idea.

But while it’s a decent premise, the Wolfs don’t quite pull it off.  The book suffers from a number of structural issues: uneven pacing; exposition disguised as conversation (usually almost monologue) to give background or explanation; coincidences that stretch credulity, solutions to dilemmas that just come a little too easily.  I think there is a good adventure story here, and one more rewrite under the guidance of a good developmental editor could have brought it out.  As it stands, 2 ½ stars.