Set a few years in the future, The R.E.M. Effect combines cutting-edge genetic 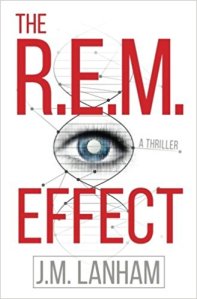 research with fast-paced action, resulting in a science-fiction thriller that kept me turning the pages.  Ocula, a drug that promises a good night’s sleep by silencing a specific gene that causes insomnia, is highly effective in trials, but for a few people, the effects go far beyond the purpose for which it was designed.  One rogue executive wants to harness those side effects…even if the participants in the drug trials are unwilling.

Author J.M. Lanham has done his research, and he does a pretty good job of condensing and explaining the science in a manner that is accessible to the reader without talking down to them.  There are a few debatable points around interpretation and generalizations, but until I asked my resident Ph.D in genetics to read the relevant pages and comment, it just niggled at me a little (I’ve only got an master’s degree in the same field, and I haven’t used it in a very long time.) So, I think it’s safe to say most readers won’t notice, or care –and it’s a lot more accurate than the science in Jurassic Park!

The story is well paced and the characters likable; the writing is competent and appropriate to the genre.  I lost track of one story thread, but that’s as likely to be my fault as the writer’s.  It was only the ending that confused me: it left a lot of unfinished questions, and I had to dig around a bit to find that there is a sequel in the works. For that reason only, my rating is four stars rather than five.  I’d definitely recommend The R.E.M. Effect for fans of the science-based thriller.