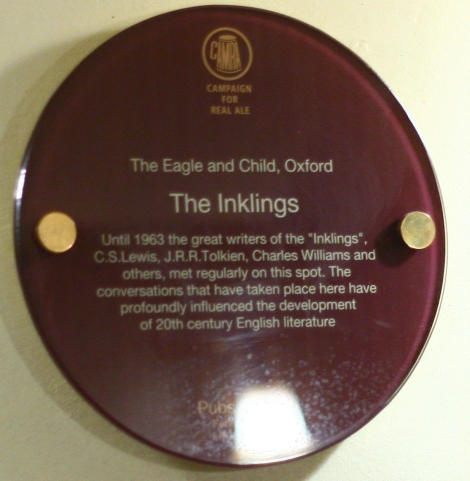 This is a reflection about coincidence, or synchronicity, or possibly about me seeing connections where there are none, except in my mind. It doesn’t matter, really.

I am, by training and education and part of my working life, a scientist; an applied geneticist, precisely, and that training and education spills over to my avocation as a birder and amateur field biologist. But by possibly a deeper inclination, a desire for a mythological interpretation of existence that goes beyond the seeming black-and-white of science, I find deeper truths in the worlds created by certain writers: JRR Tolkien first and foremost.

A friend of mine is groaning at this point…not elves, he is thinking, much as CS Lewis said at the meetings of the Inklings. Which brings me back to the coincidence, or synchronicity, I mentioned at the beginning. The Inklings, or more precisely their meeting place, are part of this: for many years, their famed Oxford writing group met at a pub called the Eagle and Child, better known as the Bird and Baby, in St Giles’ Street. Here CS Lewis and Tolkien and many others shared and discussed their writing, giving feedback on what are some of the most influential fantasy and science fiction novels of the twentieth century, the books that made me, first, want to be a writer, and then taught me how to write.

But about 75 miles away, and a few years later, at the pub also named the Eagle and Child, in Cambridge, Francis Crick and James Watson announced their discovery of the structure of DNA at lunchtime one day. This too, later, caught my imagination, in a different part of my brain: there is another magic in unravelling the secrets the double helix carries, deciphering the language written in the pairings of arginine and guanine, thiamine and cytosine.  Nor are the day to day processes of scientific research – the planning, the first attempts, the repetition and the fine-tuning, interspersed with moments of inspiration and realization – very different from those of writing.

There is a place – not a physical place, or not one in this world – where the helix of life and the helix of story intersect. The axle-tree of all the worlds, Guy Gavriel Kay called it: Spiral Castle, the still point around which the worlds spin, a mystical, sacred place from Welsh mythology, where resurrection is possible and life can be created, or recreated. As it can be, from DNA, or from story.

DNA writes our stories in one way; words write them in another. That both these crucibles of meaning in my life occurred in part at pubs called The Eagle and Child is only coincidence, but out of such connections we create meaning. Or perhaps, recognize it.