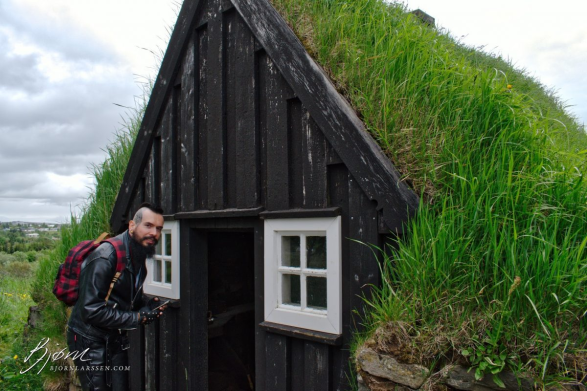 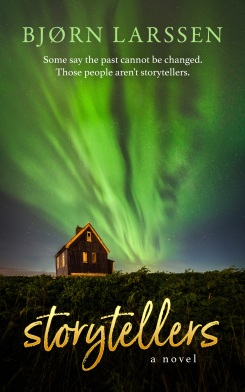 Today’s post is by author Bjørn Larssen, author of the wonderful Storytellers, set in Iceland. I’m about half-way through the book, and I’ll be posting my review soon, but until then, here’s Bjørn with some background on the setting and genesis of the novel.

The Elves of Iceland

I started working on my first novel, Storytellers, on January 1st, 2017 – an easy date to remember. The novel was inspired by a dream I had. Writing down – rather than writing – the first draft took me two weeks. The second draft took two months, but I still had one problem. The setting was “a village”, which didn’t seem precise enough for historical fiction. What I described was a community both isolated and widespread, living largely from fishing, in a place where nature was not calming and pleasant, but actively trying to kill people. 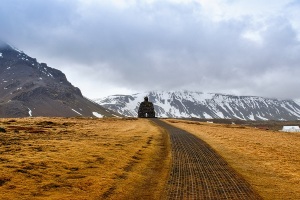 At the same time, and in the previous few years, I’ve been obsessed with the singer Ásgeir, whose debut album Dýrð í dauðaþögn (Glory in the silence) was my album of the year… for two years in a row, since nothing better came out. The English version, In The Silence, featured lyrics so beautiful they almost hurt, translated by John Grant. As I was listening to In The Silence for the 150th time, it dawned on me that there was a country called Iceland, which was cold and produced both Björk and Ásgeir. So I decided to investigate it a bit.

The first two books I picked up were a novel by Halldór Laxness, Independent People, and an introduction to Iceland’s more recent history – Sigurður Gylfi Magnusson’s

Wasteland With Words. Everything came into place. Iceland was not only a perfect setting for my novel, it felt as if the country was created especially so that I could write about it. It would take a while until I realised that the Old Gods worked the other way round, but at that point I started doing serious research. “A village in Iceland” still wasn’t enough of worldbuilding. I needed to know more. Whilst most Icelanders wrote diaries and memoirs, most of them were never translated to any language other than Icelandic. I realised I needed to go there – and talk to someone who would know much more than me.

We went for four days. I needed to spend a day in Árbærsjafn, the open air museum the name of which I couldn’t even spell at the time, much less pronounce. Other than that, we intended to see the touristic parts – Thingvellir (which my husband still calls “the Game of Thrones place”), Geysir, and other attractions by the Golden Circle. I met up with a wonderful historian, Helga Maureen, got answers to most of my questions, then we drove around until all of a sudden a wave of heavy depression fell upon me. My husband and my friend went to see the Öxararfoss waterfall, I stayed in the car. And then something unexpected happened. Twenty minutes later, when they returned, my depression was gone and I was in the perfect mood to continue driving around.

According to a survey conducted in 1998, 54% of Icelanders declared that they either believed in elves or at least did not want to deny their existence. The second option feels like a perfect definition of an elf: a creature whose existence can be neither denied, nor proven via scientific means.

In December 2013, the elves and Icelanders’ approach towards them made the front pages of worldwide newspapers. The local authorities decided that a new road needed to be built between the towns of Hafnarfjörður and Álftanes. The road would lead through the Garðahraun lava field – where a large rock or pillar of lava was a well-known church for the elves dwelling in the area. This was enough for the foreign journalists. “Iceland’s Hidden Elves Delay Road Projects,” declared the articles. At the time, this only caused me to raise my eyebrows politely before moving on to the interesting stuff (politics).

The truth was much less exciting, at least for the foreign journalists. A group called Hraunavinir (“Lava Friends”) protested against causing massive damage to one of the few completely untouched parts of the country. Their protests were ignored, and activists arrested. The protest against disturbing the elves’ settlement was simply one of the ideas they came up with, but surprisingly it proved to be the most difficult one for the authorities to ignore. Whilst no official statement was issued declaring the road impossible to build due to the elves’ presence, the authorities didn’t dare to simply announce elves didn’t exist. Gunnar Einarsson, the mayor of Álftanes has contacted Ragnheiður Jónsdóttir, a well-known psychic, to communicate with the elves. It was announced that the elf church was relocated, and the elves moved out. Work on the road commenced, and has been completed by now.

Snorri Sturluson, a scholar who wrote down most of the Sagas and myths as we 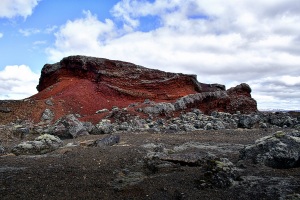 know them today, came up with two possible origins for the elves. One of them was that they were the “unclean” children of Eve, hidden from God when he came to visit (those are not my words). God, who was not pleased with this turn of events, decreed that what is hidden from Him will be hidden from everyone else as well. This is where the phrase “hidden folk” came from. The other story was even better, as it suggested that Eve was such an – ahem – lively lady that neither Adam nor God could control her. After some deliberation, God created a second man for her, naming him Elf. Therefore humans are descendants of Adam and Eve, and elves – of Elf and Eve.

Obviously, none of those stories appear in the Bible. My personal theory is that 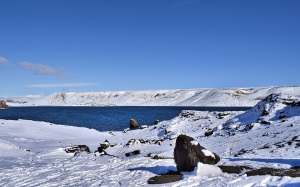 Snorri had to come up with something to avoid danger. The thirteenth century was not a good time to announce the existence of mythical beings that had nothing to do with the Christian God. Yet the belief in elves was widespread in Nordic countries even before Iceland became inhabited in the 9th century. The heathen faith lists Nine Worlds, one of which is Álfheim (the home of the elves), and another – Svartálfheim (the home of the dark/black elves). Back when the Old Gods ruled the worlds, their subjects did not use the phrase “hidden people”, but regarded them as natural spirits, same as the many species of wights guarding homes, land, trees. They had no need to come up with explanations why the elves existed. They simply did, same as Odin, Freya, Thor, and everyone knew that.

*To quote Gunnar, the blacksmith from my novel, elves are beautiful, colourful, always happy, and they also don’t exist. The elf who haunts Gunnar doesn’t particularly care about his non-existence. He is, however, miffed by the idea that Gunnar might not find him beautiful, and the blacksmith quickly apologises. It’s not wise to argue with supernatural beings.

Storytellers was never intended to be the sort of book that featured supernatural beings, but the elf not only didn’t care for Gunnar’s feelings regarding his existence. He had no interest in my opinion regarding his presence in the book either. I briefly considered forcefully removing the elf, but at the end I didn’t dare. After all, who was I to deny his existence? I was rewarded with a show of the Northern lights and ran back to rewrite the chapter that was previously based on my YouTube viewings and photographs.

The elf church in the Garðahraun lava field was moved to accommodate the elves’ needs. The psychic, Ragnheiður (Icelanders address each other with the first names, rather than the paternal names) was able to discuss things with them and come up with a compromise. Where humans demanding to preserve the lava field failed, the elves ultimately won. And I got out of depression so rapidly that no doctor would be able to explain what happened.

Of course, I don’t believe in elves. That would be silly. I am not going to deny their existence, though. Just in case.

One thought on “The Elves of Iceland”